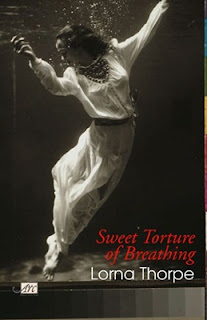 Just one of the many benefits of my new job is getting sent review copies of new books, including new poetry collections...

Lorna Thorpe's second collection 'Sweet Torture of Breathing' deals with the central themes of death, love, passion and loss. Having had a heart attack at age 50, this collection draws heavily on the power and significance of individual moments.

The collection is divided into three distinct sections. The first considers the self, a broken, bruised self struggling through life. Lorna's poems in this section are relentless, intense and dark as she comes to terms with her close brush with death.

"Distressing a Mirror" is a cleverly constructed poem in which the poet almost witnesses her own heart attack through the eyes of the mirror, if  you will. She considers the event as a drama, so it seems almost sexy. This dramatic perspective contrasts with the tone of other poems, but demonstrates Lorna's skill throughout the collection; she manages to balance the serious subject matter with humour and honesty.

The second section considers the stories of well-known figures who died before their time. Ranging from Michael Jackson to Ethel Rosenberg, these portraits are often powerful and distressing. This section is balanced successfully against the final section in which Lorna is very much alive. Her poems in this section are about unrestrained passions, sexual desire and nourishment. She uses the imagery of food and eating to imply an insatiable appetite be it for sex or martinis.

The poet's humour and frankness are emphasised particularly well in the poem "Voltage", which includes what is possibly my favourite line in the entire collection:

How can you not enjoy a poem with a line like that in it?

What I liked about Lorna's book was the way the poems really felt as though they were written by a real person, with real struggles and real desires. I could feel the energy pulsating through the pages. I also enjoyed the references to contemporary culture as it places the collection in its own place in time. Some of these, "Come Dine With Me", for instance, are arguably not poetic, but they help demonstrate the fact that not all life is poetic and dramatic, and that even the mundane moments should have value.

Look out for an interview with Lorna which will be published on December first at http://www.cypruswell.org/.

Lorna Thorpe was born in Brighton where she lived for most of her life until relocating to Cornwall in 2011. Before turning her hand to poetry she worked as a tour operator, social worker and barmaid. Her debut publication Dancing to Motown (Pighog Press, 2005) was a Poetry Book Society pamphlet choice, and her first full collection A Ghost in My House (Arc) was published in 2008. As a fiction writer, her short stories have been short-listed for awards, and appeared in magazines and anthologies. She works as a freelance writer and has published features in the Guardian.
Posted by KJW at 15:54