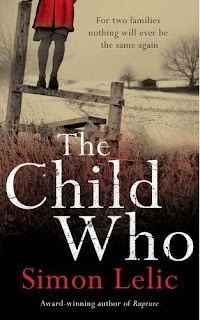 I feel under obligation to update this blog, and I feel I should point out that I've read several books between this and the last one I reviewed here, including 'South of No North' by Charles Bukowski and 'The Three Stigmata of Palmer Eldritch' by Philip K Dick.

Simon Lelic's 'The Child Who' is another advance copy from the publishers as it will be featured as the Book of the Month on the Cyprus Well website, come January - watch out for that!

The story held a double appeal for me, not only because it's about that controvesial issue of a child killer (something which holds a morbid fascination for many of us), but also being set in Exeter. Knowing the setting certainly adds an interesting element to the story.

Lelic's novel focuses on Exeter based lawyer Leo Curtice, who is defending a twelve year old Daniel who has murdered eleven year old Felicity. The story confronts the bitterness and hatred that Leo and his family encounters as a result of his involvement in the case, as well as beginning to question the way in which we demonise child killers.

I should preface this by stating that this is not a bad book. I didn't engage with the style it was written in, but the plot was interesting and it had the makings of a good thriller. Lelic begins to address issues of morality and care when rehabilitating young offenders, and we feel that Leo is committed to this cause throughout the book, even when his own family is falling apart. We have a sympathetic protagonist and we understand the conflicts he has to deal with.

However, I felt that the book was too short to deal properly with all of the issues it raised. There was barely any reference to the killer's trial, for instance. Like many contemporary books, the story jumped between different time zones, but these jumps often seemed incongruous and unplanned, making the novel feel disjointed and leaving plot lines underveloped. It just felt rushed.

I do not wish to seem overly critical, and I feel that Lelic has a talent for creating interesting plots, I just want to see him do more with them.
Posted by KJW at 11:45