Home » film » new york » review » Film Review: Roman Polanski's 'Carnage'
Based on a play "Le Dieu du carnage" by Yazmina Reza, virtually the entire film takes place in the front room of   Penelope and Michael Longstreet's house in New York. After a fight between Ethan Longstreet and Zachary Cowan, Penelope and Michael ask Nancy and Alan Cowan around to their house to discuss how best to resolve the disagreement between their sons. Initially, all seems to be going well, with only minor undertones of tension, but the situation soon deteriorates...

Here is a film that relies upon its performers and their ability to convey the disintegration of the characters' social niceties. The actors do not disappoint.

Jodie Foster plays Penelope, the judgmental, self-righteous liberal who only barely masks her disapproval of Zachary's parents. She is matched by the seemingly lovable and slightly idiotic Michael (John C Reilly), though as his mask slips, it becomes evident he does not share as many of his wife's views as we first thought.

Nancy (Kate Winslet) is the nervous wife, made anxious by the evident tensions in her marriage, stemming primarily from her husband's hilarious attachment to his mobile phone. I had been curious to see Waltz in another role after his stupendous trilingual performance in "Inglorious Basterds". This was quite a different part, but he played Alan, the uncaring workaholic, with a subtlety that allowed the humour of the script to speak for itself.

It's a relatively short film, running for approximately an hour and a quarter, but it's well paced, with shifting alliances illustrated smoothly and adeptly. Indeed, the writing is to be commended. Adapted for the screen by Reza and Polanski, they manage to hilariously overthrow the myth of parenthood, revealing that beneath it all, adults are very often more immature than their children.

I don't always recommend films, but this had me laughing throughout and is definitely worth seeing if you have the opportunity. Satire at its best. 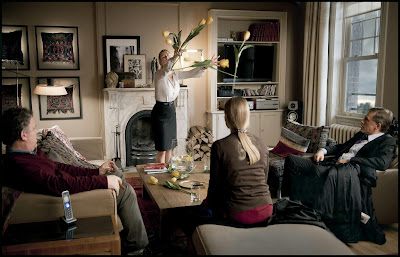 And I have to mention what might be the best delivered line of the entire film (though there are many brilliant moments):

Michael Longstreet: "We're born alone and we die alone.... who wants a scotch?"

If you watch it, you'll understand.