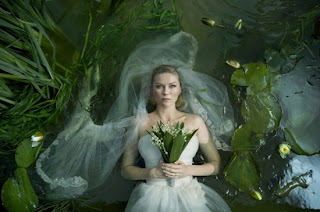 I mistakenly came across a blog reviewing Lars von Trier’s Melancholia the day before I saw it; a review that was very mixed. As I entered the cinema, I was even more unsure of what to expect than I had been before. I had been intrigued for some time by the idea of an apocalyptic film by von Trier, particularly when seeing the tantalisingly vague trailers and the one sentence blurb on IMDB: ‘Two sisters find their already strained relationship challenged as a mysterious new planet threatens to collide into the Earth'.


There are the von Trier trademarks of extreme slow motion and distinct segments. Indeed, the film opens with what amounts to the entire story in slow motion images, undoubtedly beautiful, but at times too obvious in the message they are trying to convey. For instance, while a stunning shot, the image of Justine in her wedding gown, tangled in vines is something of a cliché for the trapped, unhappy woman. I have begun with my only criticism of what is otherwise a compelling and frightening film.

The story is separated into two sections that tell the story of sisters Justine (Kirsten Dunst) and Claire (Charlotte Gainsbourg) respectively. In Justine’s section the audience views her wedding day from her arrival at her sister’s mansion, through the reception, until dawn, with Justine’s mask of happiness slipping all the while.

This is perhaps my favourite of Kirsten Dunst’s performances; she delivers a portrayal of looming depression with a subtlety that prevents melodrama but conveys her despair all the same. There are a host of other humorous performances, such as the girls’ relationship hating mother (Charlotte Rampling), and their wayward father (John Hurt), and von Trier provides his audience with his familiar brand of awkward viewing.

Claire’s story picks up some time after her sister’s failed marriage, and we see her struggle to support a sister that she openly admits to hating sometimes. The suspense builds as the planet Melancholia rises ever larger on the horizon. Gainsbourg excels as she comes to realise that the Earth is about to be destroyed, demonstrating appropriate levels of panic, while still clinging to the rituals of a human life.

With a stillness reminiscent of "Antichrist", the film builds to a despairing crescendo with the two sisters and Claire’s young son waiting on a hill for the end of the world. It is the single most disturbing portrayal of the apocalypse I have ever seen, and had me shedding tears of anguish in the final moments.

I would almost recommend the film on the strength of the final shot alone, though there is more to be gained from watching Melancholia. Von Trier somehow manages to suspend disbelief so the action feels devastatingly real. That is where the power of this film lies.

I might add that I am someone who enjoys unusual and challenging cinematic experiences, and this is certainly one of those. If you prefer a more conventional narrative, perhaps you won’t enjoy this film, though you won't know until you try.
Posted by KJW at 13:18