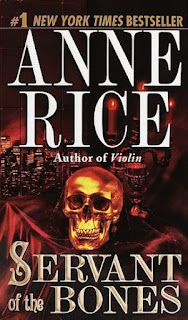 It can be a strange experience, encountering a bestselling author for the first time, long after the height of their popularity. This isn't to say Anne Rice can't still sell books. In fact, I'm certain people still await her novels eagerly (I know someone who is reading The Wolf Gift right now).

Like many, I have heard people rave about Rice's vampire novels, praising them for the detail, creativity and style (and lack of contrived story-lines starring teenagers). However, I've never been that interested in picking up any of her books. This might be because I've read a lot of excellent gothic literature (Dracula, The Vampyre etc), and that I haven't encountered anything contemporary that has the same atmosphere as these stories.

That said, I let myself be persuaded to pick up Servant of the Bones, knowing it was not a vampire story, and I actually enjoyed it more than I expected to.

Servant of the Bones tells the story of Azriel, a young man living in the city of ancient Babylon, who is unjustly turned into a spirit of supreme power. He is ruled by a series of masters throughout the centuries, until he finds himself in modern day New York, where he must decide between hate and love, between himself and the world.

It begins like many of the best horror stories with the main character arriving in a secluded spot to tell his tale. Azriel tells his story to author and scholar, Jonathan.

Now, this is storytelling at its most ambitious; Azriel has journeyed through the ages. It is an epic in that sense, and would make a fantastic film. I enjoyed how this method made for an interesting perspective on the modern world. In the third part of the book, we see modern day New York through the eyes of an ancient spirit- a thrilling experience- as he marvels at our technological advances, at our progress. This also allows for a critique of contemporary culture from a narrator who is not a part of it.

Azriel is undoubtedly the best part of this novel. He is a brilliant narrator, leading the reader through the ornate temples of Babylon, through hoards of restless spirits, to the clogged streets of New York. Rice has a talent for describing places that feel real to the reader, and this vividness is one of the aspects of her writing that I enjoyed most. Occasionally, this is taken too far with too much time devoted to the description of a goblet, or a seemingly unnecessary sex scene, but on the whole, the descriptive style is an asset.


Can genocide be justified to eliminate suffering nations?
What is the role of religion and faith in contemporary society?
How much influence do the rich have on the information we receive?

All of these things add depth to the story, though my main criticism would be that it all becomes a little too melodramatic towards the end of the novel. New relationships come into play that seem underdeveloped. Gregory Belkin is a brilliant villain, but we spend comparatively little time with him.


It's a good book, but not a great book.