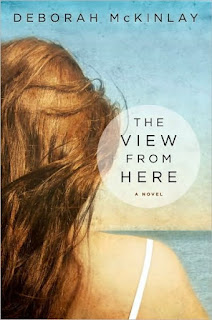 I don't know about you, but I read books for all sorts of reasons, and sometimes I feel like a break from literary fiction and poetry. I don't have a television, so this kind of reading stands in for watching trashy tv, as something enjoyably passive.

As last week drew to a close, I was feeling in one of those moods; I wanted something with a good story that was easy going. Fortunately, I am always within easy reach of a decent paperback, what with the books we're sent at work, and the ones I inherit from my parents once they're done with them.

Deborah McKinlay's novel, The View From Here, is narrated by Frances, a 46 year old woman dying of cancer (I know, I know, this hardly sounds like the relaxing read I had in mind, but let me carry on). The story switches between the present and a past summer in Mexico when the 23 year old Frances ended up being taken in by a clique of wealthy Americans, and starting an affair that would change her life forever. As Frances comes to terms with her imminent death and her husband's own affair, we come to realise just how far she let passion drive her.

If summer with a bunch of rich Americans, endless martinis, swimming in the sea and an illicit romance doesn't tick the 'easy-going' box, I don't know what does. And I really enjoyed this element of escapism (perhaps it's down to the fact that I haven't seen the sun in weeks!) But the story is more than reflections on a summer romance; it is about the complexities of marriage, the rashness of passion, and the mistakes of the young. Frances is never quite in on the subtle sarcastic remarks of the couples she's staying with, often preferring the company of the children, who are also unaware. There are some deliciously scathing remarks made by Sally Severance, which reveal the world of these wealthy Americans all too clearly.

If a steamy, Fifty Shades kinda read is what you're looking for, you'll be disappointed. This writer deftly avoids uncomfortable sex scenes, retaining her focus on the story. And it's a good story, with the last grim twist saved until the last few pages of the novel. I'd suggest this as a good summer read.
Posted by KJW at 18:59