Home » beats » film » new york » perspective » writer » writing » Perspective: Films to Inspire Writing
We all feel uninspired from time to time. It happens to everyone, and it's totally normal. However, if you're a creative person, it can feel horrible, soul-destroying, crushing... the list goes on.

There are no end of tips and lists for those of us who find ourselves feeling uninspired. For writers, I would usually suggest reading, but there are times when the weight of too many weeks at work get too much for you, and you're just too tired to read.

When this happens, I turn to films. There are any number of films that are so achingly beautiful (Lost in Translation, The Tree of Life, Melancholia...), that merely watching them makes you feel enriched, and this can help cure your lack of inspiration.

If you're a writer, like me, then there are several films that I would highly recommend watching when you're feeling blocked. So, in no particular order, three of my favourite literary themed films, guaranteed to get your creative juices flowing. 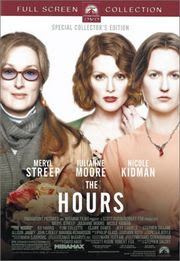 Sure, this film is sad, and I can't get through it without weeping, but it also explores the challenges of being a writer. I don't think I can articulate it better than Richard does in the film:

I wanted to be a writer, that's all. I wanted to write about it all. Everything that happens in a moment. The way the flowers looked when you carried them in your arms. This towel, how it smells, how it feels, this thread. All our feelings, yours and mine. The history of it, who we once were. Everything in the world. Everything all mixed up, like it's all mixed up now. And I failed. I failed. No matter what you start with it ends up being so much less. Sheer fucking pride and stupidity.

If nothing else, it will make you feel better about your feelings of inadequacy, as it reaffirms the fact that all writers are aspiring to (and failing to completely) capture the tiniest moments of existence. And of course, fans of Virginia Woolf will love Nicole Kidman's portrayal of the writer as we watch her pen one of her most famous works, Mrs Dalloway.

Any of you who follow me on twitter, may have read my recent guest post on a friend's blog (A Literary Lady's Guide to New York), in which I sing the praises of this film. Aside from delivering the text of what is considered to be one of America's most iconic poems, complete with stunning animation, this is also a film about overcoming conservative censorship. Jake Ehrlich states it thus:

It's a beautiful biopic of Allen Ginsberg, but mostly it's a film about the power of language to articulate our darkest secrets and desires, no matter how unsavoury some may find them. In the end, the written word wins through.

Ok, which of us book lovers honestly hasn't dreamed of meeting some of the bygone greats of the literary world? Well, many of these brilliant writers appear in Woody Allen's magical romantic comedy. Gil is the struggling writer who discovers a way to travel back in time every night and meet the likes of Ernest Hemingway, Gertrude Stein and F. Scott Fitzgerald. Add to this, that the film is set in Paris, and you have a film that can't fail to feed your inner romantic.

Adriana: I can never decide whether Paris is more beautiful by day or by night.


Gil: No, you can't, you couldn't pick one. I mean I can give you a checkmate argument for each side. You know, I sometimes think, how is anyone ever gonna come up with a book, or a painting, or a symphony, or a sculpture that can compete with a great city. You can't. Because you look around and every street, every boulevard, is its own special art form and when you think that in the cold, violent, meaningless universe that Paris exists, these lights, I mean come on, there's nothing happening on Jupiter or Neptune, but from way out in space you can see these lights, the cafés, people drinking and singing. For all we know, Paris is the hottest spot in the universe.

Of course, the great thing about this film is that the struggling writer gives up his secure job churning out screenplays, ditches his obnoxious fiancee, and moves to Paris to write. It's a novelist's dream...