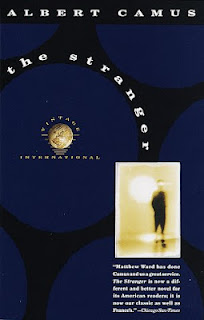 It can be a risk reading a much loved, much praised book a long time after the fact. This is how I feel, opening titles friends and colleagues have praised. In the case of Camus' The Stranger, dare I say it, I feel a little bit underwhelmed.

For those of you unfamiliar, this novel tells the story of an ordinary man, who begins a course that ends with him being jailed for murder. Told through the eyes of the protagonist Meursault, the novel is divided into two distinct parts: before the murder and after.

It is not that I don't like this novel, I do. I like the writing style, and there are some truly beautiful phrases in Matthew Ward's translation. The first half of the novel in particular, is sensory and quite lovely to read. From Meursault's Mother's funeral, to swimming with Marie, this is evocative writing.

I also very much appreciate the philosophical message of the book; the idea that free will is a state of mind that has to be reached, as well as the overriding sense of absurdity and meaningless that comes through Meursault's musings.

But this book had been built up as something truly great, and for me, it doesn't match up with other literary masterpieces. I'm thinking anything by Milan Kundera, but especially Immortality, which approaches similar philosophical ideas, but with far more likeable characters.

I am not saying I have to like a character to enjoy a novel, but I suppose I found that the action seemed to unfold too quickly, though yes, I realise this is to accentuate the absurdist themes of the novel; a normal life quickly descends into something out of control.

I appreciate what the book is doing, I just didn't enjoy reading it as much as other books. Though I'm still intrigued by Camus and would like to explore his writing further.

(Isn't it strange that I feel oddly guilty about not having liked it as much as everyone else seems to...?)