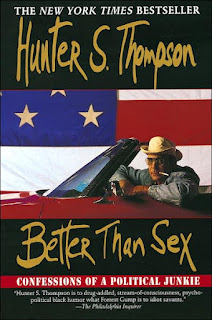 I'm sure some of you find yourselves fixated on the lead up to this year's American Presidential election. I must confess, I have become far more involved in what's going on in American politics by virtue of The Colbert Report and The Daily Show, political comedy shows that I didn't know about until moving in with an American. We're hearing that it's one of the dullest elections ever, primarily due to Mitt Romney, who manages to make everything he says sound like it's been written for him, badly.

I thought it would be appropriate to pick up Hunter S Thompson's Better Than Sex, which chronicles the 1992 presidential election between George Bush and Bill Clinton. The narrative is broken up into fake and real correspondence between Thompson and various people from the campaign, an accurate timeline of significant events in the run up to the election, including shifting polls, and, of course, his own accounts and responses to what happens along the way. This, my friend, is what has been termed 'Gonzo Journalism'.

I've read Kingdom of Fear, so am familiar with Thompson's style of writing. He is genuinely one of the few writers who is laugh out loud funny. His talent for strange and wonderful metaphors is incredible, and his writing pulsates with life. Whether he's mulling over his attitude to Clinton, Bush, or Nixon, there is a genuine passion in his reporting that is infectious. One of the best examples of this passion comes at the end of the book, when he writes about his detestation of Nixon (whose death had been announced shortly before the book went to print). His anger is testimony to his belief in better people, in better leaders.

Of course, don't read this if you're looking for a non-biased account of that election. That's the whole point of Gonzo journalism: the writer makes no apologies for writing from his own viewpoint. It just happens that I agree with a lot of what he said.

And I can't help wishing he were here today, because commentary on this election would definitely benefit from his discerning writing.

Oh, and in case you're wondering, he ultimately decides that politics is not better than sex...