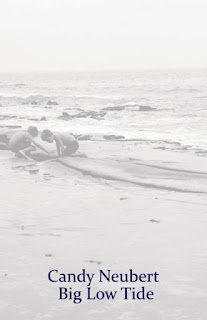 Big Low Tide came to my attention through work (watch out for our feature on her next month). This book wasn't at all what I was expecting...

In Candy Neubert's novel Big Low Tide set on a small island in the Channel, Brenda, a feisty barmaid at the local pub suddenly finds herself raising her two young boys alone as her estranged husband, Peter- realizing he cant take the children with him- leaves for Ireland in search of better prospects. Worn down by the constant struggle and pregnant with a third child whose father is nowhere to be seen, Brenda's spark begins to dwindle and her children become more and more unruly. No longer able to cope she moves in with her sister in law, Elsa, who without warning walks out one day leaving the run of the house to Brenda. Seeing Brenda's slow decline, a friend persuades Peter to return and soon after on a wild and windy night, her youngest son disappears. As they search for the boy little do they know how close they are to finding something dark and terrible. This is a powerful story of reconciliation, hope and the wreckage of relationships broken, its dark undercurrents proving all is rarely as it first may seem.

I think I believed it might be a run-of-the-mill chick lit novel, where the struggling single mother came to find hope and happiness by rediscovering her children, perhaps falling in love along the way. I have to say, the story is somewhat more bleak and realistic.

Candy is known as a poet, as well as a novelist, and her writing certainly has that spark of the poetic. She describes the landscape of the island very well, and the reader has a strong sense of this closed community, where everyone knows everyone else's business. She creates an atmosphere very well.

Her real strength is in her ability to conjure such believable characters. Peter is the doting father, a man scarred by the breakdown of his relationship with Brenda. Brenda is injured, hurt and withdrawn, let down by a new man she believed she had a future with. The pain these characters experience is conveyed through the minimalist choice of writing style. But Neubert shows that you don't need to write a lot to create a powerful story.