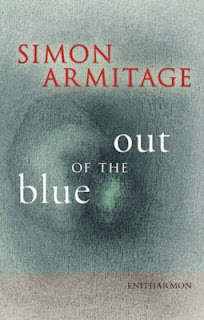 I have always loved studying literature. Even now, when I have a lovely job that lets me exercise my creativity and meet famous authors, from time to time I miss being a student. I'll toy with the notion of a PhD which is (financially) completely unrealistic, and (personally) perhaps not as appealing as it first sounds.

One thing I am certain of though, is that the research I did during my Masters degree on poetic responses to events of mass death, holds a deep and unresolved fascination for me. Some may consider the subject matter a little... depressing, but there are few things that interest me more than literary responses to large scale tragedies, such as 9/11 or Hurricane Katrina.

To me, this area brings together so many elements- literature, the history of elegy, media representations, attitudes to death, political rhetoric- that get to the heart of the culture we live in. If there were a way of studying under the tutelage of a renowned scholar in this area, while still pursuing a career, and not having to move very far, I would probably jump at it.

That's a lot of preamble for a post about getting published. Because, I have just been published in an *actual* academic journal (you can be impressed now). It's called Social Alternatives, and is an Australian journal. This led to all kinds of panic as I wondered what differences there are in the spelling of Australian English words (as it turns out, not too many to worry about).

But getting to this point was considerably more arduous than I thought, and I wish University had prepared me for that. Perhaps there are courses that give guidance on seeking publication for your work, but this was not the case at Exeter.

And I'm not even sure how people find calls for papers relevant to their research interests. I stumbled upon Social Alternatives' call through the National Association of Writers in Education (NAWE) website, but that's only because I regularly use that site as a source of news for South West writers.

So I found this call... and the issue is called 'Disaster Dialogues', which is just ridiculously well-matched to my research interests. It was a happy alignment of the stars, so I gleefully wrote an abstract for an article exploring shifts in elegy through a close reading of Simon Armitage's poem 'Out of the Blue'.

It was accepted. Huzzah! I thought I was past the hard part, but writing the damn thing, cutting down months of research into a mere 3000 words, was tough. Then came the peer reviews. As if it weren't daunting enough to have my work sent out to proper academics (I like think of myself as 25% academic), I had to critique two essays. I fear I did a shameful job on this because I couldn't read them without thinking how much better they were than mine... I think my comments were pretty complementary, and extremely uncritical (AKA useless).

By this stage, I was convinced I'd get my essay back asking for major revisions, which I knew I wouldn't have time to do. So when it came back with just minor revisions; a few structural changes, making the introduction clearer, I was pretty pleased, if not totally convinced I'd be able to make the changes and remain within the word constraints.

I didn't quite stay in the word limit, but the editor gave me a bit of leeway, so all was well, and it'll be appearing in the journal in October.

This is all extremely exciting, considering I never even thought my writing was academic enough to be considered for publication. It was only when my supervisor suggested I should think about publishing some of the work that I thought about it seriously. Of course, at that time I was in the midst of writing the dissertation, and I didn't have time to focus on anything else.

The problem is that this has sparked my interest afresh, and I'm now wondering where I can go to suggest new essays for publication. Is there a source out there for people who want to publish more research? Or is this impossible once you've moved out of the University environment? Any insight would be greatly appreciated!
Posted by KJW at 15:41