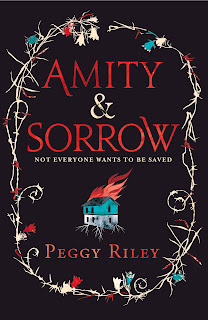 I should preface this by saying that this book doesn't come out until next year, but I was fortunate enough to receive a review copy in advance from a Twitter contact.

When a novel describes itself as a book about "God, sex and farming", you could be excused for thinking it might be somewhat light-hearted. However, this book is heavy, serious, and powerful, and (in my opinion) this tag line doesn't quite work.

Amity and Sorrow are two girls raised in a religious cult somewhere is the southern states of the USA. The cult consists of their father and his fifty wives and numerous children. We meet the sisters as their mother Amaranth escapes the cult with them, having unearthed a dreadful truth she'd been too blind to see. They find themselves in sparse farmland in Oklahoma, where they are taken in by Bradley, a struggling farmer himself. But Sorrow's ingrained faith prevents her from adjusting to a life outside the cult, and she longs to return to the father who abused her...

From the outset, this book grabs you by the throat and never fully lets you go. The story's narration switches from present to past, so the full extent of this religious cult's damaging environment is only learned gradually. Riley is extremely skilled at creating an atmosphere of intrigue; this is a true page turner.

I have only read one other book I can remember that deals with a damaging religious cult, and that is Chuck Palahniuk's Survivor (perhaps my favourite of his books). While he deals with the screwed-upedness of his characters with a dry, sick humour, Riley's book is sincere, and distressing as a result.

This distress is conveyed most poignantly through the character of Sorrow, who is so indoctrinated into her faith, and so besotted by her abusive father, that she cannot adjust to normal life. Her blind belief is impossible to overcome, and the book is about coming to terms with this fact; the damage is irreparable. Amity, by contrast, is a gentle character. She is fascinated by the new world she is thrown into, and able to forget the old rules more easily. Her problem is how much she loves Sorrow.

My favourite character arc of the novel was definitely Amaranth. The reader has a real sense of her struggle to overcome her guilt and the feeling of sisterhood she had with the other wives. Her character is complex; she has a history, and as more is revealed, the reason she is in this situation became more understandable. Here was a woman with no prospects, getting drunk every night, when a man comes along preaching hope.

The sexual journey of Amaranth is also interesting. We feel as though she is being reawakened by Bradley, allowed to flourish again, and all of this is set against the metaphor of the farmland. A land which begins to yield crops as Amaranth begins to recover.

Yes, this story is bleak, disturbing, sickening even, but it also provides a thoughtful examination of the impacts of polygamous cults, and the reasons people are attracted to them in the first place.

It is a highly accomplished first novel.