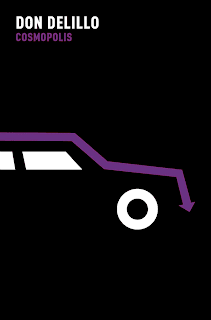 I promised you more reviews of books with a New York theme (did I mention I'm flying in just one week?), and having reviewed The Hours, now it's time for something totally different (and equally magnificent).

For any regular visitors to these pages, you may recall I reviewed Falling Man by Don DeLillo earlier this year. I mentioned then that I was thrilled to have discovered an author who had an extensive back list to explore. Typically, it has taken me some time to get around to reading another of his novels (due primarily to my ever-growing 'to read' list). But I was having a book buying binge the other week, and Cosmopolis made it onto my Amazon order.

The book is a 'day in the life' novel that follows twenty-eight year old multi-billionaire asset manager, Eric Packer around New York City in his limousine. Driven by the impulse to get a hair cut, the young billionaire attempts to navigate a city brought to a standstill due to a Presidential visit, an anti-capitalist protest, and the funeral of a well-known rap artist. On top of this, Eric's bodyguards inform him that there may be someone roaming the city with the intention of targeting him...

Eric is a character obsessed with playing the stock markets, and he is constantly plagued by the increasing value of the yen. He watches events unfolding on the screens in his limousine, and there is one particularly distressing scene in which he witnesses another financial man being murdered on television:

There was a close up on one of the screens. It was Arthur Rapps' pulpy face blowing outward in spasms of shock and pain. It resembled a mass of pressed vegetable matter. Eric wanted them to show it again. Show it again. They did this, of course, and he knew they would do it repeatedly into the night, our night, until the sensation drained out of it or everyone in the world had seen it, whichever came first...

DeLillo examines the nature of advancing technology, the way in which it removes us from real experience. Eric is married to a woman he hardly recognises, a union based entirely on her coming from 'old money'. He has a series of intense sexual experiences lacking any lasting connection.

The story is set in a kind of alternate reality- a New York that is recognisable, and wonderfully exaggerated - the result of which, is a novel which adeptly criticizes twenty-first century American culture, as one centred on gain at the expense of actual human experience.

Perhaps not the romantic view of New York that I have, but certainly a view that is insightful and not without elements of truth.

A part of me wishes it didn't seem so rare to come across such wonderfully intelligent, well-crafted writing, but then I suppose its rarity is what makes it so special.