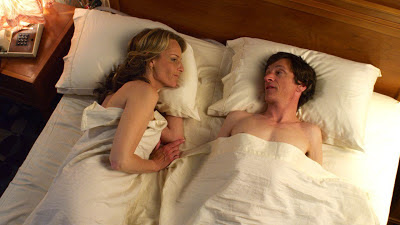 You'd be forgiven for not having heard much about The Sessions. I was only alerted to the trailer because I live with a man who frequents IMDB daily.

The Sessions is based on a real life story of Mark O'Brien (John Hawkes), a man all but paralyzed by polio when he was a child. Having lived most of his life flat on his back, inside an iron lung, and with constant access to oxygen, Mark begins to consider the things he's missed out on. At the top of this list is sex. Having seen a sex therapist he is referred to a sex surrogate, Cheryl (Helen Hunt), whose job it is to help disabled people develop their ability to enjoy sexual experiences. What follows is a tender tale exploring the connection forged between Mark and Cheryl.

Too often films shy away from any kind of legitimate portrayal of sex. We are either exposed to aggressive, in-your-face sex, or the issue is avoided altogether, with strategically placed scene breaks. As William H Macy said in a recent interview "the United States has got it pretty well bolloxed up" when it comes to sex. Macy plays the reasonable Catholic priest, Father Brendan, who becomes Mark's confidante, employing some wonderfully subtle comedic acting in this supporting role.

What makes The Sessions so brilliant is that sex stops being a big deal. We all know that there are people out there who object to sex and nudity in any form, insisting that it's an obscene act, and one that we shouldn't expose our children to. But it just isn't. With frequent nude shots of Hunt, and semi-nude shots of Hawkes, their bodies become normalized. There is actually very little that's erotic about the film. As Cheryl teaches Mark to enjoy being touched, to enjoy touching, the audience is reminded of the intimacy of the sexual act. The relationship that develops between Mark and Cheryl is one where physical intimacy is paired with emotional attachment. And isn't that what sex is all about?

I heard some criticism via the Guardian film podcast, over the fact that Mark's genitalia is never shown on screen. I can appreciate this might be frustrating to some viewers, though I think some leeway should be granted to director, Ben Lewin, as it's likely a choice made based on distribution and age ratings. Personally, I didn't have an issue with it.

The performances are strong. John Hawkes' portrayal of Mark is pitched perfectly; the right levels of neuroses and humour make for a thoroughly likeable character. Helen Hunt is sincere and utterly believable as the conflicted therapist, and both actors convey their journey from awkwardness to ease with great sincerity.

The overall tone of the film is tender and affirming. There were moments that made me laugh, and moments that made me cry, but with a subject matter as serious as disability I think it achieved a good balance. This is a film with heart, and one that I really recommend.

Buy the film: The Sessions [DVD]