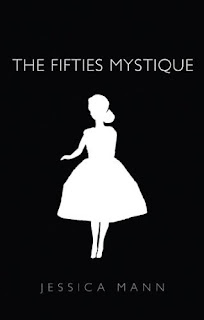 Have you ever looked back fondly on the days where it was 'the done thing' for a woman to be a stay at home house wife? Do you long for a pretty apron and the simple joy of baking for your charming family? Well don't. That's Jessica Mann's advice in this memoir come historical account of fifties life.

Born just before WW2, she grew up in the post-war era of austerity, restrictions and hypocrisy, before anyone even dreamed of Women's Lib. The Fifties Mystique is both a personal memoir and a polemic. In explaining the lives of pre-feminists to the post-feminists of today, Jessica Mann discusses the period's very different attitudes to sex, childbirth, motherhood and work, describes how she and other young women lived in that distant world with its forgotten restrictions and warns against taking hard-won rights for granted.

With accounts of her time as a child in the post-war years, she recalls what a sudden change it was for women who who went from having the freedom to work during the war, to having to be the 'kept' housewife, owned by their husbands. As well as having to come to terms with this new lack of independence, women had to deal with the day-to-day shortages of food which continued into the 1950s.

The freedom to be open about sexuality had not yet been won, and as a consequence many women did not understand the concept, or even have much awareness of their bodies. While Mann argues that there are some pitfalls to a society where children have become more sexualized (one need only look at contemporary fashion), the openness of today's society is still preferable to the shame of that period.

Mann recalls discussing sex with her school friends years later, when she admitted to having slept with her husband before they were married (something she took for granted was the case for other women), only to find that her friends had not. This instance demonstrates one of the drawbacks of this book, which is that Mann's perspective was fairly progressive at the time. She is well-educated and married to a man who was understanding of her desire to be independent. Therefore, while she backs up her work with well-researched anecdotes, she cannot fully explore the true horrors of being a subjugated woman in the fifties (though she doesn't claim to be able to).

However, that's not really the point of the book. Mann's experience offers a unique perspective on the progress made for women in the past fifty years, through the eyes of a woman of today. For a young person such as myself there is no question that this was an enlightening read, and a timely reminder that though 'retro' trends can be fun, we don't want to give back the freedom which took so long to win.

Thankfully, I've never been one for aprons, and I can't bake to save my life. In fact, the fifties make me think of characters such as Laura Brown in The Hours, who are destined to go slowly insane in a quiet suburban hell.

Buy for kindle: The Fifties Mystique

Buy the book: The Fifties Mystique