Recommendation: Back to Blood by Tom Wolfe 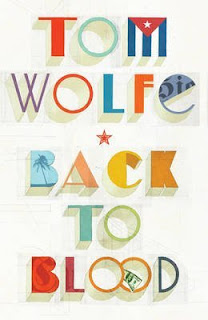 Tom Wolfe's latest novelistic offering explores racial tension, class difference, and the cult of excess with his trademark wit and irony. Set in scorching Miami, Wolfe's energetic prose will have you laughing out loud and cringing in disgust (sometimes at the same time).

The primary storyline is centred on the fate of muscular Cuban cop Nestor Camacho as he unintentionally gets caught up in not one, but two race scandals. Ever the keen cop, he continues to work even when suspended from duty, and is unwittingly responsible for uncovering an art scandal that will shake Miami's high society to the core.

Well-meaning as he is, Nestor is perhaps the only semi-likeable character among a cast of porn-addicts, dishonest journalists, wealthy Russian mafia, and quack psychiatrists. These exaggerated creations are more caricatures than characters, who serve to emphasise- beyond any doubt- that this is satire. There is no mistaking Wolfe's flamboyant use of grammar, onomatopoeic language, and playful names, as real life.

Subtle, it is not, but one has to admire the sheer energy of his words. Weighing in at a little over seven hundred pages, the author has constructed a fast-paced, visceral romp of a story. While it might not deliver the serious message one might expect from the title, it is an enjoyable read that you'll struggle to put down.

Buy the book: Back to Blood