Perspective: Afghanistan at the Southbank Centre 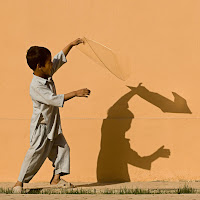 I'm not typically very spontaneous, but those of you who regularly read the blog may have picked up on my growing interest in Afghanistan, so when on Friday morning I saw an all day event on Afghanistan was on at London's Southbank Centre, I decided to go.

The day began with a panel discussion entitled The Great Game chaired by Bidisha, featuring Victor Sebestyen, Patrick Hennessey, Jonathan Steele and Medea Benjamin. Bringing the knowledge of scholar, authors, and soldier to the mix, there was a great emphasis on how people felt the country would cope once foreign troops completely withdraw. The general consensus seemed to be that it would get worse before it got better, though the Afghan attendees were more positive about the country's future, believing that freedom from foreign powers will be liberating for the people.

The second session of the day was perhaps the most enlightening and positive of the ones I attended. Najib, a seventeen year old Afghan boy now living in the UK described the story of a rocket attack which injured him and killed his younger brother. Taken under the wing of a journalist, Najib was offered the opportunity to study English at a school in Kabul, before deciding to pursue education in the UK. Having studied hard, he is now a pupil at a private school.

There are several reasons this young man was so inspiring, not least the confident, and matter of fact way in which he recounted his horrifying experience. He has shown great strength and determination to get where he is now, and while some may decide on a future in the West, Najib wants to return to Afghanistan and practice as a doctor there. Having first hand experience of the lack of specialist care available in his home country, he is actively doing what he can as an individual to change it.

As the event came to a close, and people praised this young man, one of the Afghans in the audience asked who he blamed for the rocket attack that killed his brother. With all the grace and wisdom of someone three times his age, Najib replied 'no one', demonstrating his ability to rise above this and to see the bigger picture. It happened, he cannot change it, but he is doing what he can to get the education he needs to help his family.

The final session I attended was with Zarghuana Kargar, the woman who compiled and edited Dear Zari, which I reviewed here last year. Again, Bidisha provoked an interesting discussion about the oppression of women in her country, but what I liked about hearing from Zarghuana was that she still wanted to celebrate the bravery and determination of the women in her book. Yes, life can be hard for women living in Afghanistan, but the message from all three of the sessions I attended was one of hope for a better future.

It was a truly inspirational day.
Posted by KJW at 16:04