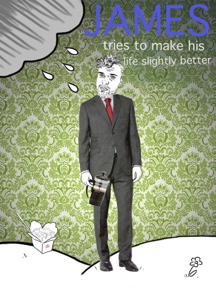 In this one man show James Tapp takes an amusing look at the ever popular self improvement culture through the eyes of an awkward twenty three year old. As the audience enters the performance space at City Gate, James self-consciously looks around, and this engagement with those attending characterises the show. Whether asked to reassure him that he's not needy while he recounts his woeful attempts at romance, or told not to laugh as he tries to bear his soul via a half finished cardboard dummy (to represent his inner self), active viewers are very necessary.

James begins his list of self-improvements with several on personal grooming. His delivery, while feeling a little scripted, is well timed, and he allows the audience to enjoy the moments of humour. He quickly moves on to pledging to improve his diet and exercise more, though it is his awareness that he won't do these things that makes his performance funny. As a comedy character, his distinctly middle class concerns and air of charming awkwardness are reminiscent of comedian, Jack Whitehall.

However, the piece lacks energy at times, and I'd question whether the subject matter is engaging enough for a forty minute show. Transitions between sections often felt arbitrary, and while his self-deprecation is endearing, the performance lacks a certain energy.

This review was first published in Wildfire, the daily critical review for Exeter Ignite Theatre Festival 2013.
Posted by KJW at 11:08