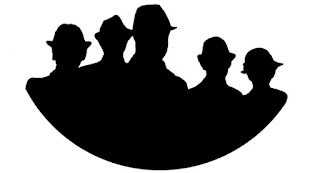 Improvisation is a difficult beast to master, but The Improsarios demonstrate how it should be done. The first into the theatre, the actors were friendly and informal with the me, and they know how to put their audience at ease. Audience participation is kept to a minimum, and we were only asked to call out suggestions of words to inspire the piece at the start of the show.

'Anxiety' was the chosen word at this performance, acting as trigger for three very different short plays. The first saw a crotchety old man (Tai Lawrence) have an exchange with his grown up son (Alexander Chard). Expecting the improvisation to focus on comedy, I was taken aback by the unexpected gravity with which this piece was played, dealing with a troubled childhood, yet steering clear of melodrama. It was beginning to lose energy before the end, but we were quickly into the next piece.

In the second play, holistic therapist (Hetty Burton) dealt with divorced businessman (Lawrence), and unhinged man (Chard) to hilarious effect, demonstrating some great physical theatre. Asked to take part in breathing exercises and bizarre confrontations with their inner demons, this was the most overtly funny piece. Yet it was a treat to see an improvisation where the performance doesn't fall to farce. The actors knew not to overplay their hand.

Finally, we were confronted with nervous groom to be (Chard), best man (Lawrence), and bride to be (Burton). This was perhaps the most clichéd piece. Nevertheless, the performers sold it and it was a joy to witness the complete transformation of these actors. The Improsarios reminded me what raw acting talent looks like by producing scenes which were varied, subtly played, and entertaining.

This review was first published in Wildfire, the daily critical review for Exeter Ignite Theatre Festival 2013.
Posted by KJW at 08:12