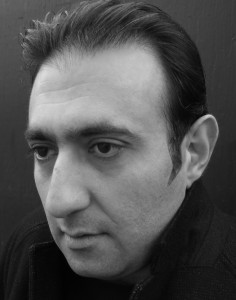 Vienna is billed as being the story of one man's obsession with Midge Ure and Ultravox. As such I expected a production grounded in a love of music, perhaps incorporating something of a soundtrack. Unfortunately, the description of the play is largely inaccurate and while there are frequent references to music (and even some air guitar), there is remarkably little actual music.

The theatre space at Cygnet was set up as a front room, complete with sofa, chair, television, and a decent stock of vodka. Opening with Annabelle lazily pouring her first glass of the spirit, we are quickly introduced to her pesky ex boyfriend, Barry, who appears to be a regular unwanted guest. The pair soon engage in repetitive dialogue about Annabelle' s affair; a subject which is addressed no fewer than three times, with no variation in approach.

Directorial choices are inconsistent, with spotlights on the two characters at the start of the play as they reveal their inner feelings, though no follow up on this stylistic choice. While Barry is supposed to be a slightly obsessive, nervous character, it was frustrating to see a piece with quite so much pacing back and forth.

Part way through the script, it becomes clear that Barry is experiencing some kind of existential crisis: "It's all theatre!", he says of life, suddenly somewhat paranoid about his lack of grip on reality. This, like many bizarre topics the play references (AIDs being another), is sorely under examined. This is the real problem with Vienna, it lacks direction, and left me wondering what the playwright was getting at.

This review was first published in Wildfire, the daily critical review for Exeter Ignite Theatre Festival 2013.
Posted by KJW at 08:14