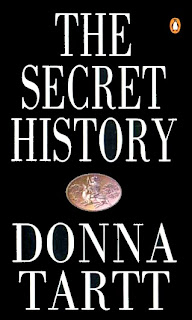 I know I'm late to the game with this one, and it's been recommended several times by several different people.

Donna Tart's "The Secret History" tells the story of a group of Classics students at an elite Vermont college. Richard Papen, our narrator, finally works his way into a clique of four students. A poor student from California, Richard feigns wealth and standing in order to be accepted into the group. Yet the aloof nature of these students conceals more than first meets the eye, and the book explores the lengths they're willing to go to in order to achieve states of higher being... Including killing one of their number (don't worry, this is revealed on page one!). After all this, they must learn to live with what they have done.

There is something about this book which makes it utterly absorbing. I was taken in by Richard's tale, as the pace of the story built. In revealing who has been murdered at the start, Tartt provides a wonderful carrot to keep the reader engaged. How does a group of erudite, seemingly harmless students come to the decision to kill one of their friends? What could possibly inspire such a thing? And the answer to this- pursuit of experience, a higher state of being- somehow makes perfect sense.

Once we reach the first climax of the story - Bunny's death - we are still left with half the novel. All I could do was keep reading as the ties that had seemed so lasting, began to unravel, and the characters fall apart.

It is the narrative view which is so compelling. Richard is ostensibly an outsider, and it is through his eyes that I became totally immersed in the story. I got taken in, as he did. The characters are so mysterious; Camilla and Charles, the sweet natured twins who are rather closer than you'd expect siblings to be; Francis, the stylish one, easily led by Henry; and Henry himself, the sinister, calculating intellectual.

There's not much else to say, other than this is just a damn good story and you should read it.

Buy the book: The Secret History

Buy for kindle: The Secret History