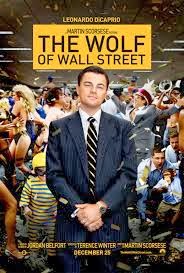 One of January's few redeeming features is film awards season. We're always treated to a flurry of new releases which are strong contenders for the various awards. This year, I find myself having watched many of those nominated for Best Picture at the Oscars so have decided to run a series of mini-features on those which have been nominated for the coveted award in 2014.

First up, for no other reason than I watched it last night, is Martin Scorsese's latest offering to the movie world: The Wolf of Wall Street. With it seeming like a while since we were last treated to a film by one of Hollywood's most prolific directors (think back to Hugo), this is one which I greeted with some expectation.

The film tells the story of Jordan Belfort (Leonardo DiCaprio), a young American who rises to riches through becoming a ruthless stockbroker. DiCaprio runs full tilt at the role and does a good job with it, though in my view, not 'Best Actor' good. Drugged up, drunk, and half-crazy, his company becomes ever more morally vacuous, ever more willing to exploit and deceive innocent customers, until the inevitable fall from grace as they all come under investigation from the FBI. Based on the memoirs of a real person (this horrifies me), the film is high octane, and relentless; three hours is a long time to sit through it.

Marketed as a black comedy, there were moments of the film which were certainly funny; awkward conversations about the office prostitute bill with Jordan's father, Matthew McConaughey's introduction to stockbrokering, and many scenes in which Jordan's business partner Donnie (Jonah Hill) appears. However, the film is hindered by the fact that all of the characters are totally unlikable, and due to the narration by Jordan, we're pretty sure from the outset that he gets away with it.

Critics have accused Scorsese of reveling in the excess of the lifestyle, and it's easy to see why, with nudity, swearing, and drug taking featuring prominently in the film (and I mean prominently). I'm inclined to agree that overall it lacks depth, and the portrayal of women is particularly problematic; they are hookers, sex objects, mere bodies with no substance. One may argue that this is only a reflection of Jordan's lifestyle, one based solely on superficial pleasures, but I think this is a problem with the script.

Wolf of Wall Street feels 'sleek' and 'stylish', but not much else. I'd be disappointed to see it pick up Best Picture this year especially given the high quality of the other films up for the award.

Buy the Book: The Wolf of Wall Street