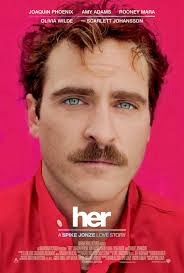 Spike Jonze has really won me over with this gem of a film. Set in a future where computers are playing a larger and larger role in people's lives, we are introduced to Theodore Twombly (Joaquin Phoenix), the sad man who is struggling in the wake of his marriage breaking down. Working as a professional letter writer, Theodore is a sensitive, romantic soul, played brilliantly by Phoenix. I'm not ashamed to say I fell a little bit in love with this adorable oddball myself.

One day he decides to upgrade his computer with a personalised operating system, named Samantha (voiced by Scarlett Johansson), and everything changes. Samantha becomes so much more than a machine as she and Theodore begin to get to know each other. As their relationship develops into something more, the pair face various hurdles: Samantha's inability to experience the physicality of the world and how the couple might be perceived by outsiders.

This is such a refreshing take on a love story. With a script which is by turns hilarious and profound, the films raises questions about the nature of love, relationships and what it means to be human. Samantha particularly, is a wonderfully constructed character, voiced with beautiful tenderness by Johansson. Amy Adams is lovely as ever in the role of Theodore's best friend, a woman just coming out of a long and unhappy relationship herself.

I also enjoyed the clean, fresh, futuristic style of the film, which made it visually pleasing. The story is not without sentimentality, but I don't mind this. It's the sort of off beat romantic film that recalls Seeking a Friend for the End of the World or even Safety Not Guaranteed.

Her is unlikely to win Best Picture, but it's definitely one I would recommend seeing.

Pre-order the film: Her [DVD]