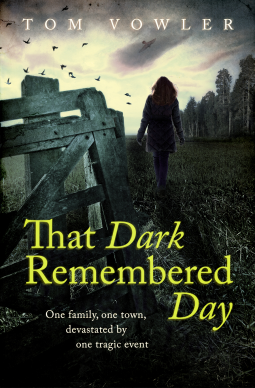 That Dark Remembered Day tells the story of Stephen, a grown man whose life has been turned upside down by his own violent actions. When he hears that his Mother is unwell he makes the journey to the town in which he grew up only to be confronted with the past he has long since tried to escape. As the story unfolds, we are introduced to Stephen’s mother and father, a nurse and soldier as they recount the events leading up to a tragic day in the summer of 1982 where their lives were destroyed.

It is a brave writer indeed who takes on such emotionally wrought subject matter. Vowler’s first novel, What Lies Within explored the legacy of a rape and his new book is darker still. What makes his writing so affecting though, is his ability to construct complex, sympathetic characters. Where a lesser writer might deal with trauma simplistically, Vowler’s character’s experiences are nuanced, less black and white. This makes their actions infinitely more believable and is testimony to the author’s thorough research and sensitivity.

From the opening pages, the writer draws us in to Stephen’s world laying hints at a past which has shaped his present, and this is what makes the book so compelling. The uncertainty of the specifics of that day in 1982 build an atmosphere of tense anticipation and a burning desire to read on. We may well wish we hadn’t as the tragedy unfolds but Vowler’s writing is skilful, poetic even, and the reader becomes submerged in the rural landscape that is so skilfully evoked. There is beauty in the writing despite the difficult themes which are addressed. All in all this makes a rewarding, if disturbing read.

This review was first published here.
Posted by KJW at 11:34