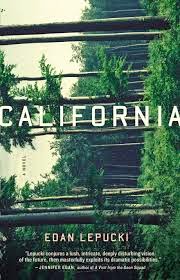 Like many, this book was brought to my attention by Stephen Colbert who singled it out during the ongoing dispute between his own publisher and Amazon. Having benefited from 'the Colbert bump'. it quickly shot onto the bestseller lists in the States. There probably aren't many celebrities whose recommendation would make me seek a book out, though Stephen Colbert is one of them.

California is set in the future, a sort-of post apocalyptic world. In fact, the story is about where people go when ordered society begins to break down as a result of inflation, shortages of key resources and climate change. The novel's focus is on Frida and Cal, who have found themselves out in the wilderness living a simple life away from the troubles in LA.

However, when it appears that Frida might be pregnant, her view of their life together changes and she wants to go in search of other people. With alternate chapters narrated by each of them, Lepucki's skill is in thorough characterization. We get to know and like Frida and Cal, and this is what kept me hooked.

After they find their way into a community of adults, it seems that there may be something of a happy ending for the pair, but there is a sinister undercurrent of secrets which prevents either of them from feeling wholly at home.

In the same way as writers like William Golding, Lepucki seeks to highlight the intricate dangers of humans when they are forced to live in closed off communities. While I enjoyed the novel, I felt that it didn't pack quite the punch I would have liked as it drew to a close. I was imagining far worse conclusions than ultimately came to be.