The Culture Diary ~ The Trials of Oscar Wilde at Trafalgar Studios 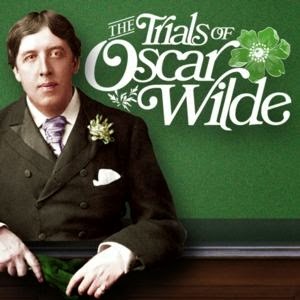 Trafalgar Studios is just a short stroll from Charing Cross station. Having never been to this particular London Theatre before I was uncertain what to expect. As it turns out, the clue is the name and the studio space in which this play was performed was a small black box. While the seat numbering left a lot to be desired, the space was ideal for the show we saw.

As fans of Wilde are well aware, the writer's career was blighted by legal action against him on the grounds of his engaging in a sexual acts with other men. Written by Merlin Holland (Wilde's grandson) and John O'Connor the play is based on transcripts of the trials in which Wilde was involved, and provides a fascinating insight into the culture of the time. The studio space is well suited to a play of this sort and the audience may well feel like members of the jury in this intimate courtroom.

The story is brought to life by the talented three person cast- John Gorick, Rupert Mason & William Kempsell- who manage to capture the formality of the courtroom with unforced energy. Mason and Kempsell bring verve to each character they play, demonstrating great versatility and dramatic skill. Their ability to transition seamlessly between characters gave the play an absorbing quality that only the best theatre has.

The story is well put together with lights fading and recordings from The Importance of Being Earnest being played, highlighting the ways in which Wilde's double life corresponded with his art. Gorick is charming as Wilde and I was drawn in by his wit and the way he relished the performance of the courtroom. For lovers of Wilde's writing, there is much to admire in his eloquent speech and musings on the nature of art and beauty.

However, the play also provides insight into the seedier side of Wilde's life. With sodomy being illegal at that time, homosexuals were forced to the margins of society, and in Wilde's case this led to a series of encounters with lower class youngsters who he paid for sex.

The Trials of Oscar Wilde is an intelligent recreation of a period in history and definitely worth seeing if you have the chance. It runs at Trafalgar Studios until November 8th.