Book Review: "Dancing in the Dark" by Karl Ove Knausgaard. 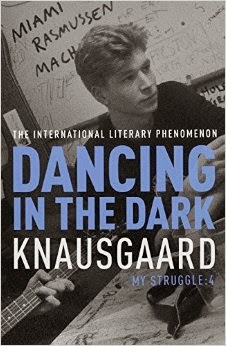 I told myself I was going to save this novel when I received it at the Foyles event with the author on Monday March 2nd. Unfortunately, that proved impossible as I caressed the signed title page and sat down on the train ride home, awestruck by my encounter with Karl Ove. Inevitably, I opened the first page, just to read a little, and inevitably I got immediately sucked back into the fourth part of this mesmerising memoir (reviews of 1, 2, & 3,).

Dancing in Dark sees the author on the cusp of adulthood, fresh out of school he moves to Northern Norway to take a job as a teacher in order to earn enough money to see some of the world and of course, write the great novel. This is perhaps the first book in which we see the writer he will become, as a young man brimming with enthusiasm and driven by the sense of self conveyed through his own writing.

As an eighteen year old teaching a variety of age groups, at first he feels it is easy. Yet, he must come to terms with the small-community mentality which sees all hope of a private life shattered. When he briefly dates a local girl, his students are asking him all about it when he's in work on Monday. Considering his propensity to get blind drunk and lose control in social situations, this is subject to cause him a great deal of anxiety as he wonders what the fallout from his behaviour might be.

Perhaps the driving force behind this part of the six volume memoir is the young Knausgaard's desire to have sex. Having had many an opportunity to perform the physical act of love, Knausgaard fails time and again due to premature ejaculation. Seeing into the mind of an ardent eighteen year old may not sound as though it's anything special, but it is this authenticity of experience which again makes the volume so compelling. He is insecure and plagued by his failure as a lover, despite opportunities with attractive women.

Again, the figure of Knausgaard's father is never far from the story. In this volume, the relationship between his parents is over and his father has settled down with a new woman and begun to drink heavily. Whether conscious of it at the time or not, one cannot help but see the similarities between Karl and his father in terms of their desire to get drunk and become emotional. At the London event Knausgaard spoke with the sincerity I have come to expect from reading his books, on how the impetus for writing the memoir was his father's death from alcoholism. He was candid about the strange experience of seeing his father change completely when he reached the age of forty and began a new chapter of his life. In this book, Karl is not certain what to expect when he visits his father; sometimes it is the strict, harsh man of his childhood, and sometimes it's the relaxed sentimental lush.

I loved reading this book and getting inside the head of this passionate young man. The young Karl is full of dreams, seriousness, romanticism, passion, all battling for dominance as he tries to find his way. This is a coming of age book in the truest sense of the term and the author captures that wonderful sense of the absolute potential of life as an eighteen year old. I was taken back to a night standing on the street outside of my halls of residence at university, full of wine, gazing up at the pink sky and feeling dizzyingly free and alive.

Knausgaard captures both the universality of existence and the individual nature of experience. It's just beautiful. Do I really have to wait another year for the next volume?

Buy the book: Dancing in the Dark (My Struggle 4)