Retro Review: "Tender is the Night" by F Scott Fitzgerald 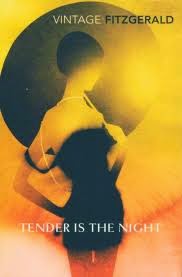 “They were still in the happier stage of love. They were full of brave illusions about each other, tremendous illusions, so that the communion of self with self seemed to be on a plane where no other human relations mattered. They both seemed to have arrived there with an extraordinary innocence as though a series of pure accidents had driven them together, so many accidents that at last they were forced to conclude that they were for each other. They had arrived with clean hands, or so it seemed, after no traffic with the merely curious and clandestine.”

I've been going through several of those books I've always wanted to read recently and I have to say it's making a welcome change to the usual flurry of recent releases. Tender is the Night was one of two titles by F Scott Fitzgerald that I picked with the £50 worth of books I won, the other being The Beautiful and the Damned which I've yet to open.

It's been a long time since I read Gatsby, but I was immediately wowed afresh at the author's wonderful ability with words. He captures the heat of summer on the French Riviera and I felt transported to a time wholly separate from the one I inhabit.

For those unfamiliar, the novel follows Dick and Nicole Diver, the fashionable wealthy couple around whom a collection of friends gravitate. The novel opens in France where they have created a summer season that centres on the house they have built. However, the arrival of the young and beautiful actress Rosemary sets in motion a chain of events from which it becomes impossible for the Divers to recover.

When I read that the book is about an affair between Rosemary and Dick, I wasn't expecting the slow unfolding of this relationship. In fact, the story and the affair spans a good five years, and it is this broad scope which lends the novel such power. Fitzgerald takes his time in developing each of his characters.

With tragic brilliance, we learn the origins of Nicole and Dick's relationship; she as patient and he as psychiatric doctor. I loved how the romantic, public view of the Divers - the one Rosemary is so taken in by - is turned on its head as the story develops. Instead, we see a couple whose love is bound with the instability of Nicole's moods and Dick's own sense of obligation. This is the most interesting thing about Fitzgerald's novel: the depth and nuances he creates within the relationships between characters.

It is an incredibly sad novel of course and the book shows broad echoes of Scott's relationship with Zelda. Ultimately, Fitzgerald leaves his characters bruised by life and all illusions of true romance left in pieces.

Buy the book Tender is the Night (Vintage Classics Promo 113)