Book Review: "We Are All Completely Beside Ourselves" by Karen Joy Fowler

Home » books » read women » review » Book Review: "We Are All Completely Beside Ourselves" by Karen Joy Fowler 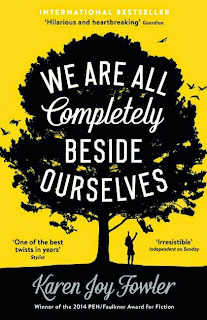 I appreciate that I'm late to the party with regards to this novel, though having enjoyed reading it so much, I thought I'd share my review. *Don't read on if you're spoiler averse*

Rosemary Cooke is a quiet adult, much quieter than she was as a child. As the years have drawn on, she has clammed up, suffering in the wake of  the loss of her sister and her brother Lowell's subsequent disappearance. The story is told from Rosemary's point of view, starting in the middle and jumping back in time to her childhood being raised alongside Fern, her chimp sister.

Rosemary is a narrator who is infinitely likeable, driven by her love for her brother and sister, ever haunted by the five years she spent twinned with Fern, and her sudden disappearance from their lives. She is witty and observant, insecure and uncertain about many things. The book acts as a means by which she comes to understand who she is, the part she played within her family, and the grief they suffered after Fern was taken away.

At the end of the novel, Fowler credits her daughter with the idea of telling the story of a child raised alongside a chimp in the era of such experiments, and the novel works because this concept is so fascinating. As readers, we are asked to consider the differences and similarities between chimps and humans, but these blurred lines are subtle and it never feels like the author has an animal rights agenda. Rather, we are asked to draw our own conclusions, to think for ourselves.

The scope of the novel is vast, with our getting to know Rosemary as a child, later as a college graduate, and finally as the adult she becomes. We see the way this "experiment" came to influence the course of both Rosemary and Lowell's lives in ways that could never have been predicted.

We Are All Completely Beside Ourselves is a book about family, loss and what it means to love. It is a warm and compelling story, and one which I would highly recommend.

Buy the book: We Are All Completely Beside Ourselves