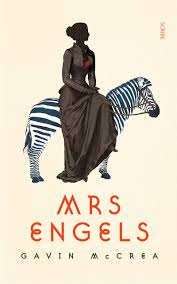 In September 1870 Lizzie Burns and Frederick Engels board a train from Manchester bound for London and a new house and life together. Lizzie is a poor Irish worker whose sister, Mary fell in love with Engels while they were both working at the factory he ran. Following her sister's premature death, Frederick takes Lizzie under his wing and they begin a life as common law spouses.

Told entirely from Lizzie's point of view, this is an accomplished novel which is hard to believe is a debut. Believing that London means a new life, the chance to be a wife (albeit unofficially) and run a house, Lizzie is eager to depart Manchester with Frederick. However, she is still chased by the events in her past. Whether it's her first love (a revolutionary Irishman), or Frederick's illegitimate son, she is at pains to make amends for prior mistakes, and finds it difficult to fully move on.

The first person narration is what makes this book so compelling. McCrea has created a willful and entertaining character who may not have the education Engels and Marx do, but has wit and insight which is all her own. Readers seeking to learn more about the revolutionaries will not find that here, but rather a story which explores the lives and pressures befalling the women closest to these two great thinkers.

Overall, this is a compelling piece of historical fiction, and one which is deserving of the attention it's receiving. Many thanks to the publishers at Scribe for providing me with a copy in exchange for an honest review.