Book Review: "A Place We Knew Well" by Susan McCarthy 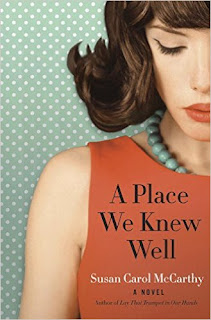 Set during the 13 days of the Cuban Missile Crisis, this is a novel which deals with how one family unraveled as the crisis hit its peak. Opening in late October 1962, the reader is introduced to Avery, an ex-air force gunman who gave it up to pursue his version of the American dream. The owner of a Texaco gas station on one of Florida's busiest highways he lives with his wife Sarah, a beautiful but fragile woman, and their daughter Charlotte. It is a life he treasures dearly.

From the opening pages this novel drew me in completely. McCarthy creates this tense, hot atmosphere as the crisis slowly develops. The reader is introduced to Sarah, and elements of her backstory are gradually revealed, providing some explanation for her nervous disposition. Simultaneously, Avery notes the comings and goings along the highway, the long trains that pass by his house in the night, his awareness bringing the reality of a nation broached for nuclear war to life with startling clarity.

The idea of having a character undergo a break down, the culmination of many years of suffering and secrets, works wonderfully as a parallel to the political happenings of the crisis. Equally, as Charlotte prepares for homecoming, there is a sense of the many infinitely ordinary lives and routines which were under threat from a potentially devastating war.

McCarthy's storytelling is reserved but atmospheric and her characters are well-rounded and developed. While the culmination of the story is highly dramatic, the journey to this point is incredibly believable. I really loved this book and it definitely earns a place on my 'favourite books of this year' list.

Thanks to the publishers for providing a copy via Netgalley in exchange for an honest review.

Buy the book: A Place We Knew Well