Book Review: "Where My Heart Used to Beat" by Sebastian Faulks 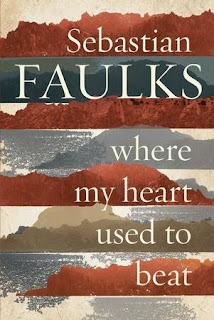 I have swooned over the tragic love story Birdsong as much as the next person, but Sebastian Faulks has also provided us with such gems as Human Traces and more recently, A Possible Life. When I found out he was releasing another novel this September it went straight on my pre-order list.

Robert Hendricks, an English doctor receives a letter from a man claiming to have known his father in during WWI. Intrigued by Alexander Pereira's claims and the potential offer of work, Robert ventures to the man's home in the Mediterranean to find out more. Pereira acts as the antagonist, a psychiatrist at heart, unraveling the events of Robert's past, serving in WWII.

When the novel opens in 1980, and the reader first meets Robert in a friend's New York apartment having an encounter with a hooker, I wasn't immediately drawn into the story in the same way as I was in some of Faulks' previous novels. It wasn't until he began to reveal the details of his past - his childhood growing up after the death of his father during the war, his promise as a bright young student and his own experience in the Second World War - that I really became engaged with the story.

The centre point of the book is Robert's relationship with Luisa, an Italian Red Cross worker he meets when on leave in Italy after being wounded. The intensity and closeness that the pair share is something which marks the rest of Robert's life, no woman ever living up to his Luisa. When he returns after the war to complete his medical training and become a psychiatrist, there is a sadness, an incompleteness which goes with him.

As the novel concludes and Robert receives the final revelation about his father, I felt that story really came into its own. It is the arc of the character's life which makes this such a good book. It's not my favourite of his novels, but Faulks once again creates a narrative which is well-thought out and deals with some of the biggest questions of human existence.

Buy the book: Where My Heart Used to Beat