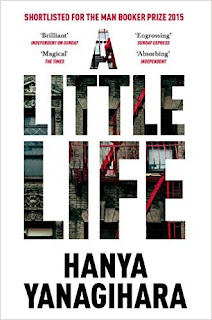 Given the Baileys Prize shortlist has now been announced and I was less than impressed by the one title I've read on the list, I thought I'd better pick up another on the shortlist. Little did I know quite what an undertaking A Little Life would prove to be. At over 700 pages this is far longer than most of the books I read.

I'll be the first to admit that the meandering tale of the lives of four young American men; Jude, Willem, JB and Malcolm did not immediately grab me. The reader encounters each of these characters as the novel begins and these sections feel very much like introductions - I wondered in what direction the book was going. However, as the focus began to shift and hone in on Jude I became sucked into the story in all its grim and painful glory.

Jude St Francis is a young man who has suffered extreme and sustained abuse during his childhood, first at the hands of the priests in the monastery he lived in, then by the wayward priest he ran away with, but who ultimately led him into a life of prostitution, and finally by the villainous Dr Traylor. We watch as Jude lives a highly successful life as an adult; a corporate attorney, popular and well liked, particularly by Willem, and adopted by his professor at age 30. Simultaneously, Yanagihara reveals the extent of his suffering and the ways in which it continues to impact on his life, most notably through his systematic self harm.

The characters that surround Jude are, in many ways, cartoonishly good and their lives work out precisely as they hope. This exaggerated quality of both the good aspects of Jude's life and the horrendous aspects of his life may well turn some people off the novel. Yanagihara is asking a lot of her readers to suspend disbelief, and yet for me it worked. The very length of the book allowed the reader to understand Jude and where his behaviour comes from. His trials, his unhappiness and deeply ingrained inadequacy is painful to read about, but conveys an important reminder of the rich and complicated internal lives we all lead, with our peculiarities and behaviours informed by past experience.

While I desperately wanted redemption for Jude, I wanted him to overcome the demons that had haunted him for so long, Yanagihara refuses to give him this. Instead, the past is simply too much to move on from. This refusal, while utterly brutal, is perhaps the reason the novel is so powerful.

There are moments of beautiful writing and wisdom in this book, but as I came to the devastating conclusion (I cannot remember being so tearful whilst reading), I was left wondering whether this is something I would recommend to people. I'm still not sure. What I am sure of, is that it is a bold and challenging read and one that is deserving of its place on the Baileys Prize shortlist.

Buy the book: A Little Life

Thanks to the publishers and Netgalley for providing a copy of this for review.
Posted by KJW at 17:01