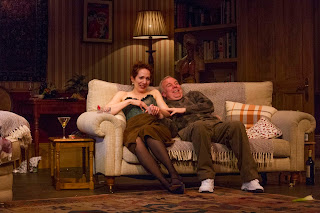 Before the week went to the dogs and everything stopped feeling funny, I was fortunate enough to be invited to Dead Funny by Terry Johnson. The revival of this play which had its West End debut at the very same theatre in 1994 provided a night of quiet snickering and a few gasps.

Focused on Eleanor and Richard's dysfunctional sex life - the former is desperate for a child and the latter is more interested in his quirky friends at the Dead Funny Society - the play throws the audience in at the deep end with full frontal nudity in the first scene. This was played very well by Katherine Parkinson (perhaps best known for her part in The IT Crowd) and Rufus Jones. Indeed, Parkinson's dry comedy was the best aspect of this production as far as I'm concerned, and she rescued the piece from becoming too silly for my taste, with her wry asides and throw away comments.

As the play descends into farce and the audience get to see various re-enactments of dead comedian's sketches, I recognised that this was a production for which I was not the target audience. An older generation would no doubt have more of an appreciation for the references which regrettably, went over my head. I was certainly amused by some of the silliness presented on stage, but overall those references did make the play seem dated.

I also felt the production had a problem with pacing towards the end where it limped on past the final scandalous revelations. I suspect this is a reflection of my not being convinced by the script. In the final act it felt as though the playwright was trying to shoehorn in a more serious message centred on Eleanor's desire for a child, though there was very little reference to this earlier in the play and I just didn't find it convincing.

Overall, it made for a reasonably entertaining evening, one perhaps more enjoyable for those familiar with the comedians referenced in the script.

Once again, many thanks to Theatrebloggers.co.uk and to the Stagedoor app for arranging a press ticket to this show.
Posted by KJW at 14:43