They Know Not What They Do...

Home » personal » perspective » politics » They Know Not What They Do... 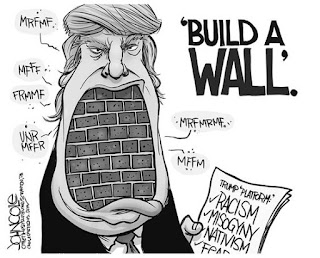 Tears before dawn; holding one another as the light rose, our incredulity palpable.

We woke to a different world today. A world where a man who has insulted, abused and lied with no shame has become the leader of one of the biggest global powers.

I couldn't take it in. As it became clearer overnight that things were going a different way, I felt physically sick, panic tightening around my throat, an astonishing sense of vertigo holding me in its grasp.

This may seem melodramatic, but when I think back to this time eight years ago, my heart sinks. We had such hope for the the future, for the first African American President, a symbol of a progressive, forward looking nation.

And I really believed this morning was going to be another of those moments; and one perhaps even more important because this was a woman who really deserved this. Someone who has given years of service to the country, put up with the media demonising her at every turn, and ended up as the first female nominee for a major American political party. Boy, did she deserve it.

As much as the impulse is to admonish those who voted for Trump, one cannot argue with the democratic process, and the people have spoken. Personally, I cannot get my head around how anyone could fall for his inarticulate primary school speak, but then I am fortunate to be looking at this from a position of privilege.

This (and the Brexit vote) should be a lesson to the liberal elite who have for too long descried the plight of the poorly educated, the unemployed, those living in rural areas, without truly understanding what it means to live that existence. Perhaps it is not so hard to understand why someone whose livelihood had been decimated with no alternatives supplied, might feel desperate enough to cast a vote for Trump, feeling he is the only candidate capable of change.

Hillary may have been the most qualified presidential candidate to ever run, but the knowledge and experience which made her so, also led to her being seen as a symbol of all the perceived failings of the political establishment.

This feeling of betrayal is made all the more bitter when the current President promised so much. Maybe this election was as much about the unrealistic expectations voters had of Obama as it was about Hillary or Trump.

Regardless, of the morally bankrupt and intellectually lacking individual who has found his way to office, we are stuck with him. And as global citizens we must continue to strive towards the tolerant, open society, despite those who might get in our way.

Giving up is not an option.