The Culture Diary: Stand Up Camden at the London Irish Centre 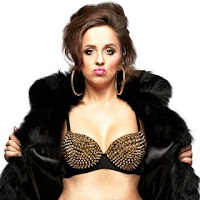 I was lucky enough to be invited to attend the most recent Stand Up Camden night at the start of the month. It was an evening which provided some much needed relief from current events and proved an introduction to some of the UK's hottest new comedy talent.

Pete Otway was our MC for the evening, and while he took a bit of time to warm up the crowd, his faux racism and audience interaction left us all praying not to be spoken to. He was able to cleverly return to audience in-jokes as the evening went on. It's easy to see why he was chosen as MC.

Kicking off the evening as the first of three main acts was Chris McCausland, the world's only blind professional comic. Chris had the hardest slot of the evening, before people decided to loosen up (drink) and enjoy themselves. As a result some of his jokes didn't quite hit the mark, but I liked his relaxed, conversational tone. I was also left laughing heartily in disgust at the joke about his daughter pooing in the bath...

Next up was Luisa Omielan, the highlight of the evening in my eyes. Providing a uniquely female view of the world of dating, and proclaiming loudly about a woman's need for sex, her quick delivery and different voices were at times reminiscent of Catherine Tate. She was sharp, fast and persistently funny. If the audience reaction was anything to go by, she was the favourite for others too.

To round off the evening, on came Jonny Awsum (a bold claim). He introduced us to his brand of musical comedy, ripping off well-known songs and altering the lyrics to comic effect. While his work had its moments, and he managed to engage the audience in a song about a one night stand, I found his humour a bit heavy handed. Musical comedy can be hard to pull off, and I'm not sure he always hit the mark in this case.

Overall, it made for an enjoyable evening. The London Irish Centre is tucked away in a quiet corner of Camden, but it's well worth looking them up for an enjoyable and reasonably priced evening of entertainment.