Blog Tour ~ "Pieces of Me" by Natalie Hart

Emma works in Iraq, helping to interview Iraqis who have supported the US forces in some way, to seek refuge in the United States. Adam is a medic in the special forces, undertaking dangerous missions that he cannot discuss. When Adam tries to help an interpreter who saved his life, the two characters cross paths, and begin to develop a bond, which soon turns into something more. But can this relationship survive once the pair move to America together and have to deal with the issues that haunt them?

Natalie Hart’s characters are well-drawn and interesting. Told from the point of view of Emma, the story shifts time frames effortlessly from the pair’s blossoming romance in Iraq to their new life together in Colorado Springs. As a British born character, Emma feels as adrift as many of her immigrant friends in America; she struggles to find her place in an environment which is wholly unfamiliar, particularly once Adam returns to the conflict in Iraq. Emma is a compelling character who holds on to the loss of her father when she was a girl, feeling distant from her family as a consequence.

There is something immediate and real about how the pair’s relationship is portrayed, and I appreciated that while the story is romantic in some respects, it fails to give the reader the neat resolution we might expect. As their relationship unravels, it is quiet, well-paced and not melodramatic.

Pieces of Me is more than a love story, it is a story about repressed trauma and the far-reaching impact that has on the lives of the characters. This is a competently written and compelling novel, a real page-turner.

Thanks to Legend Press for providing a free copy in exchange for an honest review. Find out what others thought about the book by following the blog tour! 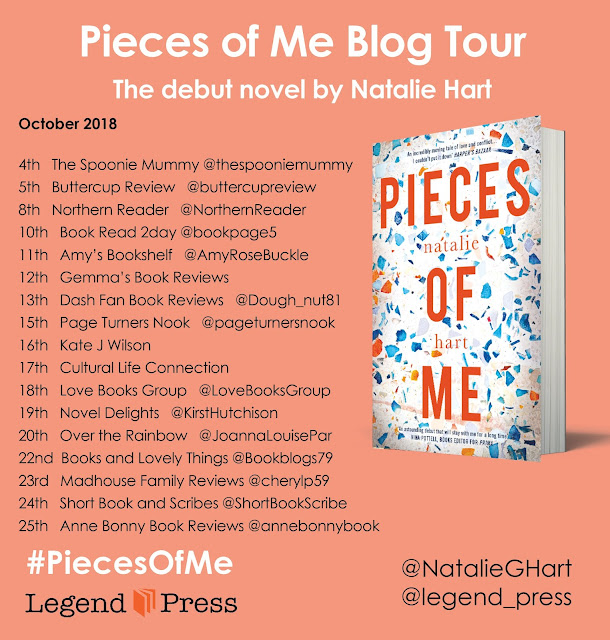