Review - Come From Away 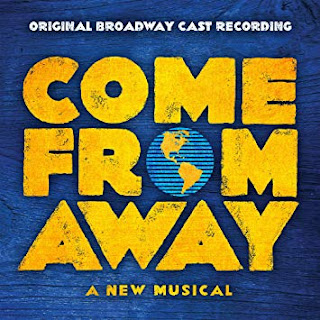 A huge thank you for Rachael for this wonderful guest post on Come From Away...

I went into Come from Away with very few expectations, being only vaguely aware of the fact it was related to the planes grounded due to the 9/11 attacks. I was a little dubious over how how such a difficult and specific subject could form the basis of a cohesive musical, and my initial doubts made the eventual emotional impact of the production hit that much harder.

Come from Away focuses on the small town of Gander, Newfoundland, a place so remote it takes several days (and many buses) to reach the nearest significant transport hub. In the immediate aftermath of 9/11, dozens of planes were forced to land at a largely unused airfield near Gander, and the occupants of the town have to scramble to accommodate the newly arrived ‘plane people’.

The musical wisely focuses on a panorama of humanity, and there are no main characters to follow - instead, we are thrown into the midst of a chaotic situation involving hundreds of people, with the gravity of what’s unfolding only gradually revealing itself. One of the most impressive aspects of Come from Away, however, is how it refuses to become mired in the horror of 9/11 - it fully acknowledges and respects that horror, but this is not a musical about an act of terrorism. Instead, it’s a much-needed reminder of the human capacity for resilience and endurance in unimaginable circumstances.

The tone is positive and uplifting, but never quite tips over into sickly or overbearing. The examples of goodness that are on display are small and practical, offers of help and much-needed interjections of humour, and we are also shown the other side of equation.The paranoia that spreads so readily in a crisis is illustrated particularly impactfully through the story of Ali, a Muslim chef who can’t even pray without arousing suspicion in those watching.

The themes of Come from Away only land so powerfully because of the effectiveness of the staging and the marvellously catchy songs. The set is minimal, with jumps in setting and character being conveyed through rapid re-arrangements of chairs and changes in posture and accent. It’s a credit to the choreography and the performers that there is never any doubt as to what is happening or who is involved.

There’s not a weak link in the soundtrack, and several of the songs are standouts. ‘Me and the Sky’ is performed by Beverly, and is based on the achievements of a real woman - Beverly Bass - who became the first female captain of an American Airlines airplane. It’s a highly individual story that you never forget is part of something bigger, with the song ending poignantly as Beverly recognises how the profession she adores has been forever tarnished by the tragedy of 9/11. ‘Something’s Missing’, by contrast, is a showcase for the ensemble - as the warm glow of Gander and its people’s hospitality fades, the crushing reality sinks in for everyone involved. It brought me to tears.

Some minor quibbles over the handling of transitions in tone and focus aside, this musical is a wonder. It bravely concerns itself with one of the most sensitive subjects imaginable, dealing with it with immense warmth, humanity and sensitivity. It had what can only be described as a cathartic effect, and any musical that can leave you feeling more hopeful about humanity’s potential for good - as Come from Away did - is to be commended.

Thanks to London Theatre for a free ticket in exchange for an honest review. https://www.londonboxoffice.co.uk
Posted by KJW at 10:34