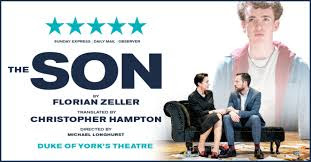 The Son is the third in a sequence of plays by Florian Zeller. I was fortunate enough to see the London staging of The Father back in 2016, so had high expectations. Spoilers ahead.

The play opens with a conversation between two parents, the script lending a sinister tone to the concerns expressed by the mother (Abigail Abbingdon). The audience learns that their son, Nicholas has been going off the rails, not attending school and seeming to be struggling with his mental health.


Zeller's script (translated by Christopher Hampton) in combination with the music choices made me suspect the story was headed in a slightly darker direction. Michael Longhurst created an atmosphere which was charged and tense. This was strengthened by Laurie Kynaston’s performance; he brought energy and sincerity to the role of Nicholas.

His scenes with his father (John Light) showed the struggle of someone with serious depression trying to communicate with a loved one without experience of this. All credit to Zeller for writing a play which so clearly demonstrates the damage of a ‘you just need to pull yourself together’ approach to caring for someone with a mental illness.

I am a big fan of the once act play where it is employed successfully and well-paced. Herein lies my one criticism of an otherwise engaging production. It ran at 1 hour 45 minutes and this could have been shorter. I felt that the script lost its way a little during the second hour. As the son finds himself hospitalised following a suicide attempt, the scenes in the psychiatrist’s office offered little in terms of story development.

A little less exposition, with more left to the audience’s imagination would have worked equally well and perhaps have delivered that final punch the audience was waiting for. Overall, a solid four star production.

Thanks to London Theatre for a free ticket in exchange for an honest review. https://www.londonboxoffice.co.uk